I’ve just had a chance to read the essay Digital Immigrants, Digital Natives by Marc Prensky (hat-tip: Granny Rose). The idea is that those born into the digital ages are ‘natives’ who think in a different way to those who have had to learn the new digital language. The immigrants have an ‘accent’ (printing out e-mails, or showing someone a website rather than e-mailing it), while the natives prefer to speak the new language (“‘www.hungry.com’ said a kindergarten student recently at lunchtime”). The conclusion is that it is the digital immigrants who will have to change they way they think, and crucially, teach… because the natives certainly aren’t going to bother with any kind of ‘backwards compatibility’.

I can hardly brand myself as a Digital Founding Father, but I am certainly a founding citizen, present at the birth of the revolution. I remember the old ways of rotary telephones, hand-written essays, blue airmail envelopes, and car doors that had to be opened with a key. But we also had a Sinclair Spectrum, and I remember playing maths games on a BBC Micro when I was only six. I think there was a window of opportunity, of those born in the mid-to-late seventies, to surf the digital wave. Each new development has been available to use at just the right time, and we’ve never had to learn anything from scratch. Pity the poor immigrants, who have to learn myriad concepts and conventions just to send a text message. And pity the poor natives, ignorant of fountain pens. They do not appreciate how far we have sailed. 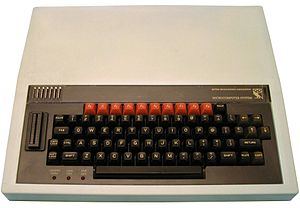