The National Theatre have today launched a micro-site for their production of Attempts on Her Life, which I am working on for Fifty Nine. There is an ambitious blog for audience reviews, and a short trailer which previews a couple of the scenes we have been working on.
And it is an ambitious production. Written by Martin Crimp, the play is billed as “a roller-coaster of late 20th century obsessions”. The ‘attempts’ deal with idolatory, fetishisation, and control. 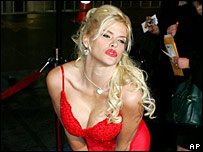 I think these obsessions have become particularly acute in the past few weeks. Anna-Nicole Smith was fascinated by Marylin Monroe. Just like her heroine, she died young and in the media glare. And just like Norma-Jean, she was objectified to the point of destruction. When we apply convenient euphemisms like ‘former Playmate model’ and ‘widow of the billionaire,’ we conceal the seedy truth: she was paid money by men who used her as an object for their own gratification. As the ever honest Onion put it, some seven years ago: ‘Anna Nicole Smith Awarded $450 Million In Nonagenarian-Fucking Fees’. We should feel uneasy about her life and descent into drugs and death. Instead we gawp, and then offer the judge in the custody case for her child a TV contract.
And always, always, the deceased woman is depicted in a red dress. Why is that?
Meanwhile, when Britney Spears chooses a haircut which does not fit with the conventional image of feminine beauty, she inspires more column inches and moral panic than when she drops her baby. Marina Hyde manages to stay above the fray as she discusses Britney’s hair in today’s Guardian supplement… along with some pertinent comments on Danielle Lloyds redemption via a series of underwear photos in Maxim, and a woman who, instead of living her own life, spends her time impersonating the obnoxious yet popular Naomi Campbell.
Another 20th Century obsession and (for me, at least) an overarching theme of Attempts On Her Life, is our relationship to The Screen. In many places, the show uses the language and conventions of TV and cinema to critique and satirise western consumer culture. Editing together the images produced, its hard not to be reminded of how pervasive these media are. It catalyses and magnifies these other obsessions. There is no escape from the larger than life icons that surround us. They are like an ever-present ambient noise, which we cannot help but absorb. No wonder there are legions of us who seek to be on The Screen for its own sake.

I will not spoil the fun by quoting from Attempts On Her Life… but I think this obsession is subtly captured in another of Crimp’s plays, No-one Sees The Video. Sally, a teenager, is being interviewed by Liz, a market researcher:

Sally: I really like – when you’re on the tube – I really like going down the end of the platform where you can see yourself in the camera.
Liz: OK. Good. Perhaps we could / get back to…
Sally: Y’know, because there’s a camera down there for the driver and you can see yourself in it on the screen only its yellow. That’s a real laugh. And by the way if this is a survey what I want to know is why whenever you put any money in a chocolate machine you don’t get any chocolate out – will you ask them that?
Liz: OK. We really ought to get back / to…
Sally: The other thing is electrical stores, I mean like Dixon’s and Lasky’s where they put a camera in the window and what you can do is see yourself in the video actually in the shop. Cos my uncle hired one for me cousin’s eighteenth and we’ve got this really brilliant video of the disco and everything which I’m in it.
Liz: That’s very good.
Sally: Although mainly my cousin.

3 Replies to “Attempts On Her Life”