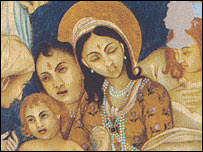 I’m not sure what the blog nettiquette is for quoting yourself, posting on someone else’s blog. I posted an opinion over at Pickled Politics that I had been meaning to make on this site. I shall repeat the thought here, but with a little more research this time.

The Hindu Forum of Britain are offended that a Royal Mail Stamp depicts a distinctly Hindu family fawning over the infant Jesus.

Commented Ishwer Tailor, President of the Hindu Forum of Britain, “Would the worldwide Christian community feel comfortable if the Government of India issued a Diwali stamp with a Christian priest offering worship to Baby Krishna?”

The quote from Ishwer Tailor betrays a wilful lack of understanding of his non-Hindu British neighbours. Despite preposterous Christian symbols on our flag, the British really don’t care about religion, and there would be little outrage to a Vicar/Krishna synthesis.

When seven men were arrested for their part in an alleged Ricin Terror Plot, the police raided Finsbury Park mosque, North London, in a search for evidence. There was an outcry from sections of the local Muslim community, who said that a Christian church would never have been desecrated in this way:

What can people have in a mosque? I think it was a provocative act. It was silly and illogical. When did you last hear of a church being raided when someone has been arrested? These people do not have principles. (Abu Hamza, via CNN)

My response was to laugh. We live in a country where our places of worship are rapidly being converted into pubs and art centres. Does anyone seriously believe that the police would think twice about raiding a chapel or arresting someone in a church! Christianity in this country does not have the same social cohesion as other religions. I cannot imagine criminals being stupid enough to stash anything incriminating under the local pews (although the thought of members of the Finsbury Park WI getting frisked with the same regularity as their neighbours down at the mosque, provokes a malevolent smile).

So it is with the slightly less sensitive issue of the art on stamps. The bizarre truth is that a refusal to pander to the Hindu religion is a sign of true integration with the ex-Christian majority, who refuse to pander to the whims of the increasingly outdated and irrelevant Church of England.

Back at Pickled Politics, a comment by Inders describes an incident in the 1980s where the police broke into a temple in order to deport a Sri Lankan man. I’ve also noticed that the visiting Scientologists are hardly being treated with reverence either…