In the aftermath of the Sydney riots, an speech published in Quadrant Magazine surfaces to chart the rise of Lebanese gangs in Australia. While the gangs battle (and subdue) the police, the suggestion that an immigrant population may be adversely affecting the area is rejected by the politicians, and the problem grows: 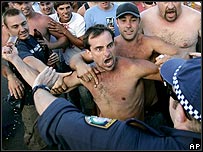 I get what Tim Priest is saying here, but his definition of multiculturalism seems to burn too many bridges. The social phenomenon he charts in Sydney is clearly undesirable: Communities living side-by-side, not integrating, becoming ghettos, that in turn become no-go areas for the police and ordinary citizens. Cultures and ethnicities living side-by-side without integration or communication is not what I would call multiculturalism… just antagonism. Multiculturalism has to imply a certain degree of integration, assimilation, and above all, a process of change for it to be something to value. I think a great many of the projects Priest vilifies are designed to promote just these things. That some of the programmes may fail can be a fault in design, implementation or personnel – There is no need to dismiss the values and the aspirations as a result.

Indeed, Priest goes on to describe the respect he has for the Vietnamese community of Cabramatta in Sydney, who expressed a desire to live peacefully alongside ordinary Australians (Melanie Phillips thoughtlessly refers to them as ‘indigenous’). Surely this is an example of an immigrant community playing a positive role in Australian national life – the very essence of multiculturalism.

The social problems faced by immigrant communties world-wide are real, but multiculturalism is the word I would use to describe the solution, not the cause of the problem. Immigrant communities can and should integrate with their host culture, but the process of change occurs on both sides. It is the acceptance of this fact, and managing the change in a positive way, which we call ‘multiculturalism’. Ignoring and rejecting it can only lead to further frustration, misunderstandings and conflict.