Amid all the distractions that this utterly insane world presents to us, it is worth reminding ourselves of the looming crisis in Zimbabwe.
Of course, I use the word “crisis” in a very anglocentric sense: I mean some violent series of events that will catch the attention of the world’s media. More afrocentric analyses have had Zimbabwe in crisis for many years. Inflation is at 1,281%, the rule of law has been all but abandoned by Mugabe and his henchmen, and many people are forced to subsist off vermin.
Via Zimbabwe News Update, we hear that as many as 22,500 miners have been arrested since November, who have been illegally mining minerals such as gold and diamonds. The sheer scale of this lawlessness is worth considering. Like the growing of opium or coca for drug use, setting-up and operating an extra-legal mining operation requires huge confidence, and no small amount of weaponry. In this case, the government seems to have asserted itself before such operations become organised, but it does not bode well for the future. When the revolt finally comes and the government breaks down completely, it will not simply be a popular revolution of the starving with (say) the Movement for Democratic Change (MDC) at its head. It will be a battle between emerging war-lords, seeking to control the country’s mineral wealth. 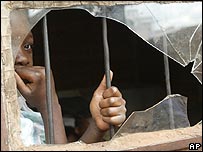 4 Replies to “Minerals in Zimbabwe”