After watching the annual song contest, beamed to us this year from Helsinki, I cannot help but think that we British are very different from the rest of our European neighbours. There must be something in the water. I thought the commentary of our own national treasure, the Irishman Terry Wogan, epitomised these differences — although perhaps not in the way he might expect.
Year after year, he and we mock Eurovision with glee, pointing out how seriously everyone takes the contest, while we participate with our tongues in our cheek. This year, however, that same attitude boomeranged back to slap us in the face. For example, when the song that was destined to win was performed by the Serbian delegation, those of us watching the broadcast with the translations could see that the song was a personal account of someone coming to terms with a lost, forbidden love. But the only words Terry could find were to mock the “owl like” lead singer, noticing the contrast between her rather androgynous appearance and the Amazonian femininity of her backing singers. She was baring her soul for the continent, and all Terry could do was chuckle.
The Serbian singer had the last laugh, however, when the rest of Europe voted in her favour, dumping the British effort into a “nosedive”. This was not a surprise – our song about low cost air travel was never going to be popular. What was noteworthy, however, was that the UK was one of the few countries that did not give the Serbian owl-woman any points. Instead, we gave ‘douze points’ to the terrible Turkish offering, which matched the British entry for vacuity, but with the added eye-candy of belly-dancers.
Indeed, we had already been told that the belly dancers were British, so in fact, my fellow countrymen had voted as jingoistic as possible, given the rules. A familiar and hilarious theme for Sir Terry is the bizarre block voting which has always characterised the competition. We find that the neighbours in the Scandinavian cul-de-sac all voted for each other; the handful of countries that made up the former Yugoslavia gave each other maximum points; and Russia exchanged top marks with her former Soviet states. This is particularly alien to the British mindset. While our own neighbours Ireland and France were kind to us in their point allocations, we did not reciprocate. Do we imagine that an independent Scotland or Wales will vote for England, or vice-versa, if the UK were to break up? No we do not, not even out of pity.
I am often criticised on this site for my apparent insistence on the relativistic, without any anchor of objectivity to judge and compare different peoples and cultures. Well, let me satisfy those critics by throwing all that relativistic nonsense out the window for a moment. Let me say that the British have this weekend shown themselves to be nothing less than a drone of boors. I mean that quite sincerely and objectively, since there is no room for irony when we talk about Eurovision. We are like the idiot at the party who initially misses the joke, yet bores everyone by repeating the same punch-line when everyone else has moved on to being serious for a moment. We are the misers who show no camaraderie or neighbourly love, who bring nothing to the party but noxious fumes and bullying laughter. We are the social inepts of Europe.
Except for me of course, because I voted for Serbia. 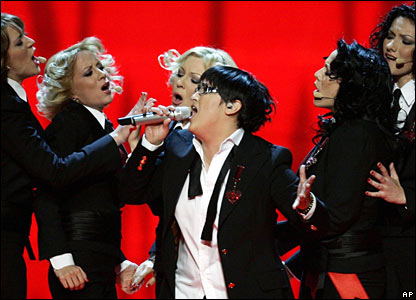 Roschekno at Smokewriting has similar feelings: “The subsequent massive failure of the song may have had something to do with said eurotypes having got used a long time ago to the increasingly smug unfunniness of official British ‘humour’.”

9 Replies to “Britain: Boors at the Eurovision Party”