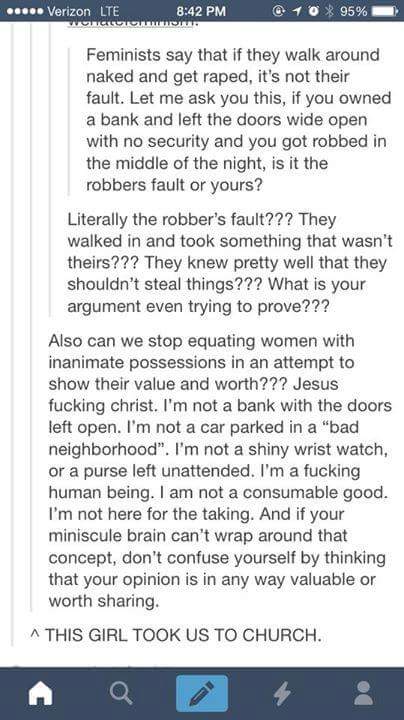 On social media, a friend shares the above exchange, on the subject of sexual assault and the clothes women wear.  The responses to the guy who compares women’s bodies to a bank vault are as good a refutation of this line of thinking as any you will see. (h/t Noodlemaz, and here’s a link to the conversation on Tumblr if you want to reblog it.)

There was more debate in the comments to this image.  One person (again, a man) said that refraining from dressing in a provocative manner was just being “realistic” about human nature. He seemed not to have considered the idea that, as thinking beings, a man who forces himself on a woman is not succumbing to human nature, just accepting without question the worst messages of our sexist culture.

This is a blinkered outlook.  There is nothing to say that our society cannot be changed and made better.  Whenever anyone resorts to the idea that something is “human nature” we must remind them that this observation is unlikely to be correct… And even if it were, that should be the start of the conversation, not the end of it.

This chat has got me thinking about Chrissie Hynde’s recent memoir, in which she appears to shoulder the blame for a sexual assault she suffered at the hands of a motorcycle gang.  I also recall the controversy during the Labour leadership campaign where Jeremy Corbyn said he would consult on the idea of women-only train carriages. Both of those stories are about the same issue as the debate above: the shifting of blame from the actual perpetrators of a sex crime onto victims; and the associated idea that there is something inherent in male Homo sapiens that makes such assaults inevitable.  The long term approach must be to challenge that underlying assumption, and to haul our culture into a place where women are safe in public, whatever they are wearing.

How might this come about?  There is clearly an onus on parents, and fathers in particular, to raise their sons as feminists1. And daughters obviously need to be reminded that the way someone dresses has no bearing on blame in any kind of assault.  No woman “asks for it” and culpability always lies with the abuser.

This is all very well. But for me it raises a crucial question: what are parents to do in the short term?  The principle is solid.  But does it work in practice?

This very weekend, many parents will be confronted with the sight of their son or daughter preparing to go out, dressed in very little! On Saturday evening, what should be the response of a mother or a father as their daughter descends the stairs dressed in a manner that, in previous times, we would have called provocative.  Our culture, and more specifically, the blokes at the party, pub and club, will not begin to treat women equally before closing time.  So the parent calculates that, without assigning blame, the chances of something unpleasant happening to their teenaged daughter are increased.

In that moment, the temptation to endorse the ‘human nature’ fallacy and to yell “you’re not going out dressed like that” will surely be far to great to resist. And when that happens, I don’t think that the parents should be condemned for their pragmatism.

So how can parents act on their instincts to protect in the short term, while not endorsing  our sexist culture and sowing the same erroneous beliefs into the minds of the next generation?

I suspect that the reason I find this so challenging is because I, too, am stuck with certain assumptions and mentally walled in by certain norms, which contribute to the very problem described above. So I ask for advice in breaking out: What else could a parent say to their daughter, this Saturday evening? Or is it simply none of their business?

1. Or feminist allies depending on whether or not you think men, as beneficiaries of our patriarchal culture, can be feminists.

3 Replies to “You’re not going out dressed like that!”