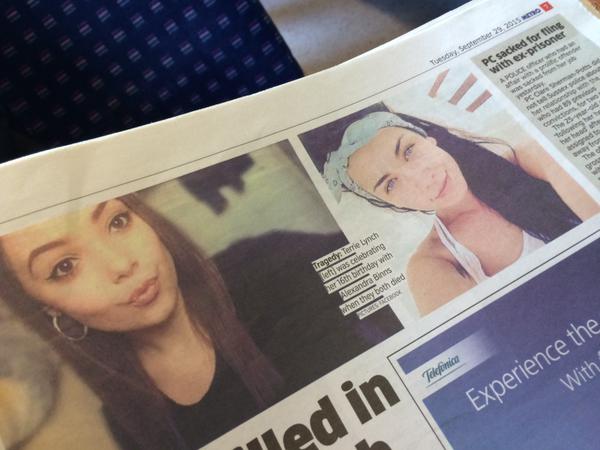 A while ago I posted on The Darker Side of Selfies, and the way in which the mainstream media illustrate the news of tragic young deaths with images from the victims’ social media accounts.

Whether it is a car accident, a drug overdose, a gang murder, or a bullying related suicide, the photo editors turn to the victim’s Facebook page or Twitter stream to harvest images. … Used in this new, unintended context, these images strike a discordant note.  The carefree narcissism inherent in any selfie jars with the fact of the artist/subject’s untimely death.

The death of Terrie Lynch and Alexandra Binns this week is a good example.

In response, human rights activist @CiLuna27 draws attention to another kind of photography imbued with sadness:

An additional type of photographs came to my mind which can have a similar function as the photographs of soldiers – photographs of human rights defenders which are taken and the person knows that this photo might be used at a later point in time to raise awareness, when he or she is in prison or vanished.

I often think of this.  Recently, when making posters for (say) Raif Badawi or Mazen Darwish, I catch myself thinking  “if only I had a higher resolution photo” as if the photographer, usually a family member, could be expected to cater to the needs of free speech activists!

These pixel constraints do sometimes mandate the conversion of the image into something stylised, which can yield unexpectedly striking results.

I remember when @hussainmjawad had this photo taken, and knowing with some horrible tiny flicker of dread in my heart that HE knew that one day it would be used to raise awareness of his profile when he would most certainly be taken to prison by the #Bahrain regime. He loves his country and was frustrated and saddened by the apathy he witnessed towards their plight. And by God, he has suffered now. He told me he expected to be taken, that he was not afraid, he just accepted that he would have to pay the red price for freedom like all the others. So when we raise his profile and that of the better 'known' activists like Zainab or Abdulhadi or Maryam AlKhawaja or Nabeel Rajab or Fatima Haji or Mohammed AlTajer or the Mushaima Clan….. We remember that there are THOUSANDS of people who's names are NOT known by the international media and who are EQUALLY deserving of our solidarity and voice! And THIS is what Hussain's message was to me!

I remember when @hussainmjawad had this photo taken, and knowing with some horrible tiny flicker of dread in my heart that HE knew that one day it would be used to raise awareness of his profile when he would most certainly be taken to prison by the #Bahrain regime.

Hussain Jawad is a lawyer and human rights activist who was put on trial by the government of Bahrain for “collecting and receiving money from home and abroad in order to support and finance subversive groups”.  The trial was abandoned and Jawad was released, but the charges have not been formally abandoned.  Shockingly, when Jawad travelled to the UK in 2014, he was denied political asylum.

2 Replies to “Photography Imbued with Sadness”