Terrible, terrible scenes on the border between Gaza and Israel. The IDF have massacred 52 protesters.

Meanwhile, social media is full of people seeking to justify and excuse this violence. The main line being parroted seems to be that Hamas provoked the attacks, because dead Palestinians are politically useful. 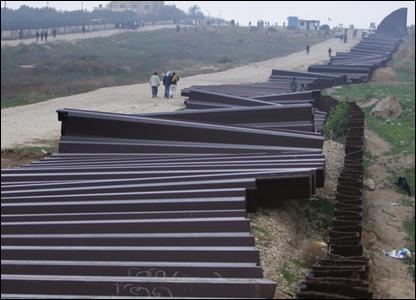 In reporting the recent Gaza border break the BBC reffered to the security “wall”. Now, call me pedantic, but that looks more like a big fence to me, just like the other “security fence” currently under construction around the West Bank.

Oh, but wait! The fence in the West Bank is actually a wall. Now I’m confused. Why can’t we get nomenclature correct on this one?

That’s the problem with dehumanising people these days, you just run into a wall of political correctness. Or is that a fence?