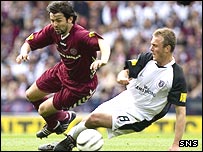 An afternoon of concentration, watching both the Scottish and English FA Cup Finals simultaneously. Both games were very exciting, end-to-end affairs, and the parallels were many – Red versus White; an under-dog versus a giant; extra-time; and finally, Goliath beating David on penalties.

Last year’s English final also went to extra time and penalties. Then, it was a necessary end to a frustrating final. This year, however, both shoot-outs were testimony to exciting games. Had the stakes been lower, we might have seen the under-dogs fight with less vigour, the favourites more relaxed, and a result determined in 90 minutes. The penalty shoot-outs are a symptom of both teams trying that extra bit harder.

4 Replies to “Extra time, then penalties”