Hooray! We’re off to the moon. UK scientists are working on the deisgn of a moon lander that would also be used on Mars missions.

It seems to me that if we are to spend billions of pounds on firing rockets into the air, how much better it would be if they flew off to the moon or Mars, in a spirit of discovery and exploration. Instead we develop rockets designed to vapourise hundreds of thousands of people. We are a very silly species.

Of course, supporters of Trident cite the unreliable regimes of North Korea and Iran as proof that we need to maintain a deterrent. But I reckon a trip to the moon would be better than a deterrent – it would be a demoraliser. Can you imagine a bigger “fuck you” to send to Ahmadinejad, than an YouTube message from the moon?

As an incentive, countries that disarm would be offered a seat on the spaceship. The sight of your country’s flag, billowing in the vacuum by means of a support wire. What could bring greater glory to your land and people? 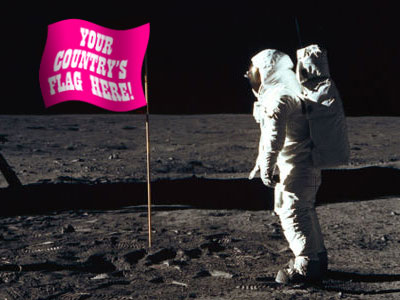 One Reply to “Blast off”