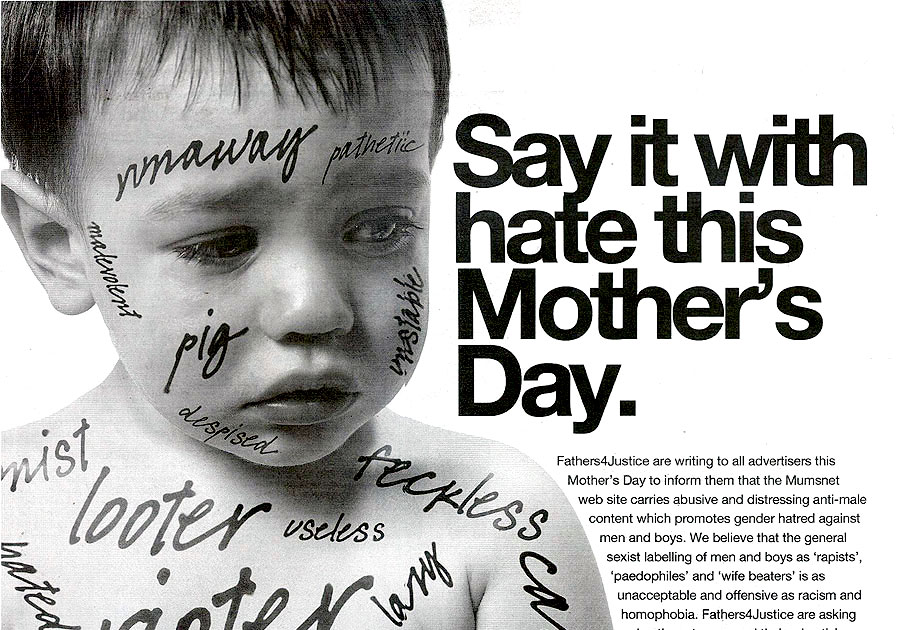 Following my recent defence, on TV and on news websites, of the rights people have to say offensive things, a few people have asked my opinion of the banned advert placed by Fathers4Justice.

The advert ran earlier this year in the i Paper (the low cost digest of the Independent). It called for the supermarket M&S to boycott Mumsnet, because the web forum carried messages which “promote gender hatred”. The text on the advert is actually worded quite politely (“Fathers4Justice are writing to all advertisers this Father’s Day to inform them…”) but the image is of a baby boy with words like ‘deadbeat’ and ‘rioter’ scrawled over his body.

The advert has now been banned by the ASA, which means Fathers4Justice cannot use it in future adverts.

Is this not an infringement of free expression? If I have argued in the past for the right of people to say insensitive things or use hyperbole, what’s the difference here?

First, an ASA ban is not quite the same as a legal prohibition. Fathers4Justice can presumably continue to make similar claims on their own websites and publicity materials. Nevertheless, an ASA ban a form of censorship.

Second, the ASA have ruled on the claims that Mumsnet promote hatred, not on the shocking imagery in the advert. Scrawling the word ‘rapist’ on a baby is certainly shocking and offensive, but that is not what has been banned.

Instead, the ASA have ruled that the advert was misleading. Mumsnet do not promote gender hatred in the way Fathers4Justice claimed.

Nevertheless, part of me wants this sort of thing to be refuted in other ways. Mumsnet is an extraordinarily influential organisation (25,000 daily posts to the forums is a lot of traffic, and founder Justine Roberts was on Question Time a few weeks ago), and I wonder whether such bizarre claims from a famously odd organisation such as Fathers4Justice could not have been fought via discussion and debate. A few cutting blog posts, that demonstrate the falsity of the advert’s assertions, would surely spread like wildfire, discrediting Fathers4Justice, and burnishing Mumsnet.

There is also a free speech issue on the other side of the fence. An Internet forum is not a newspaper. The thousands of postings that go up every day are not the editorial voice of the platform provider. The nature of the discussions (parenthood, domestic issues, child-rearing) are emotive and one might expect a degree of angry venting to take place. That’s a feature, not a bug, of such websites. Mumsnet should not be held responsible that such content arises… Especially as they have a clear policy to remove posts that violate their comments policy. If sponsors like M&S were to withdraw sponsorship of the site, it would presumably wither and die. A valuable platform for free expression and useful ideas would disappear.

Aside: Note the names of the two organisations involved in this argument: Fathers4Justice and Mumsnet. Two portmanteaus, no spaces between what should be separate words. Creations of the digital space.