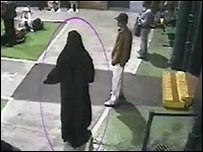 A couple of London’s evening papers yesterday published pictures of Yassin Omar, alleged terrorist, caught on CCTV as he escaped London… dressed in a burka.

In the two versions of the story I read, in the Lite and the Evening Standard, there’s a detectable but unspoken subtext, which is that these garments somehow undermine the ability of the security services to keep us safe.

No more than other head coverings. Yet “criminal flees justice dressed in hoodie” (or motorcycle helmet, or baseball cap, or Halloween mask) is not front-page news, because pretty much every criminal will conceal his identity from CCTV cameras in such a way.

If the Burka is sacred to some people, then it is they who should be outraged in such a stunt. Indeed, Omar’s insensitivity suggests that his ideology (whatever it may be) is far removed from mainstream Islam. But “terrorist disrespects Islam” is not the message I get from either the Lite or the Standard.